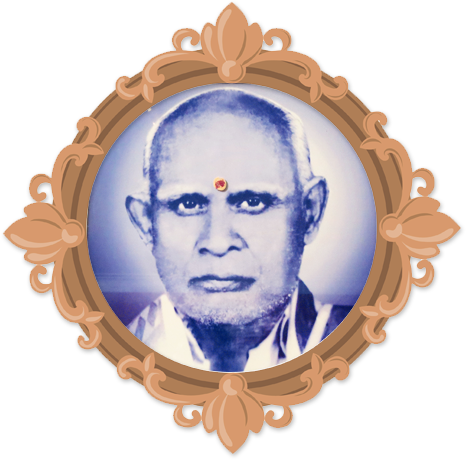 VIDWAN TIRUVARUR RAJAGOPALA IYER (ALIAS) KUNJU IYER is Born at Kurumbal near Tiruvarur in 1900 as son of Swaminathan Iyer, a Vaidika Brahmin; started first as a Ghatam accompanist, having undergone training in this under Talaijayar Gopala Iyer  and Koodimangalam Narayana Swami Iyer and learnt Mridangam under Tiruvarur Kuppana Rao; was associated with violin Ethur Swaminatha Iyer and Simizhu Sundaram Iyer of Tiruvarur. Karamurali Natesa Iyer, Ghatam Sundaramier and leading vocalists and laya vidvans of the time; worked for some time as a mridangam teacher in Kalakshetra, Chennai; has taught a number of Mridangam pupils including his son Tiruvarur Nagarajan well known Mridangam and Ganjira artiste and grandson Tiruvarur Vaidyanathan; in his last days had been teaching Mridangam in the Music Trinity Sabha, Tiruvarur; . He also played for the arangetram of  Sangeetha Kalanidhi Madurai Mani Iyer(vocalist) and  Sangeetha Kalanidhi Dr.N.Ramani(flute).Expired on 27-12-71 ,while he was playing Mridangam in the Radha kalyanam festival at the time of Deeparadhana to Lord Krishna, by ending his last breathe over it. 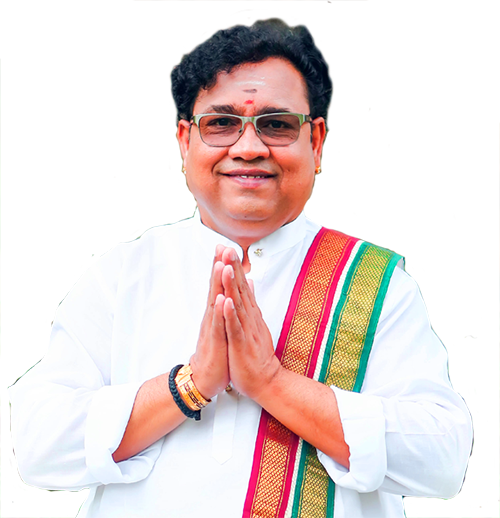 Guru Sri Tiruvarur Vaidynathan, one of the most sought after names in the percussion sector of carnatic music, has been an inspiring guru in shaping up budding musicians and transfiguring them into professional performers. Oceanic barriers have not deterred him and he has students from various parts of the world. He served at SIFAS, Singapore as a full time teaching faculty from 2000 to 2003. On his return to India in 2003, he set up the Tiruvarur Talavadya Vidyalaya Trust (TTVV Trust) in Chennai, India, where students are being trained intensively with acute commitment. This Trust was formed to ensure that gifted students, with potential for artistic excellence, are recognized, nurtured and supported as they develop their talents in pursuit of professional careers in the field of Music

In 2014, this Trust witnessed their first annual function for which numerous students from the United States had come to perform. Every year, budding artists, both NRI and locals, are given a chance to showcase their talents. This gives the students both recognition and encouragement needed to grow into seasoned artists. A day-long event is held during the December music season at Chennai. At this music festival, upcoming musicians who are striving to create a mark in the industry are also awarded for their work. Each year, a stalwart is picked, to be honored as a token of respect and motivation for the younger generation of artists. They are conferred with “The Late Shri Rajagopala Iyer Memorial Award”.

In the first year, Flute Maestro Sangeetha Kalanidhi N. Ramani was present to receive an award for his contributions to the field of Carnatic music. In 2015, TTVV Trust chose a noble cause to help the flood affected musicians. Mr. Sridhar, a drummer, and a mridangam maker at Chennai who had lost it all in the floods, were given medical assistance to help revive their lives. Mridangam Maestro Kalaimamani Sri Guruvayur Dorai accepted The Memorial Award. In the next year, the Trust opened its doors to an array of music experts, to the likes of Dr. Udayalur Kalyanarama Bhagavathar, recipient of The Memorial Award, and Shri Violin Sivaraman. Even a yoga teacher who was contributing selflessly to the society, was recognized at the event.In 2017, TTVV had a two-day event, the first of its kind, at Tatvaloka Auditorium, Teynampet, Chennai. Violin Maestro Nada Yogi Sri V V Subramanyam received The Late Shri Rajagopala Iyer Memorial Award.

In the year 2018, the Trust festival was further expanded to a 3-day music festival where in students of TTVV were given opportunities to accompany top graded artists and inspiring young musicians. Veteran vocalist Sangeetha Kalanidhi Trichur Sri. V. Ramachandran was awarded The Late Shri Rajagopala Iyer Memorial award.

In 2019, TTVV took another big step and is gearing up to host a 4 day mega event – “Margazhi Music Mela” starting from the 22nd of December, 2019 till the 25th of December, 2019. Leading patron of carnatic music and major connoisseur Cleveland Sri V. V. Sundaram received the Memorial Award.

Shri Tiruvarur Vaidyanathan, Managing Trustee and Shri B G Praveen, Secretary, have taken it upon themselves to the development and assistance of artists encompassing all genres and the TTVV Trust serves a medium to achieve this.

FROM THE PAST EVENTS 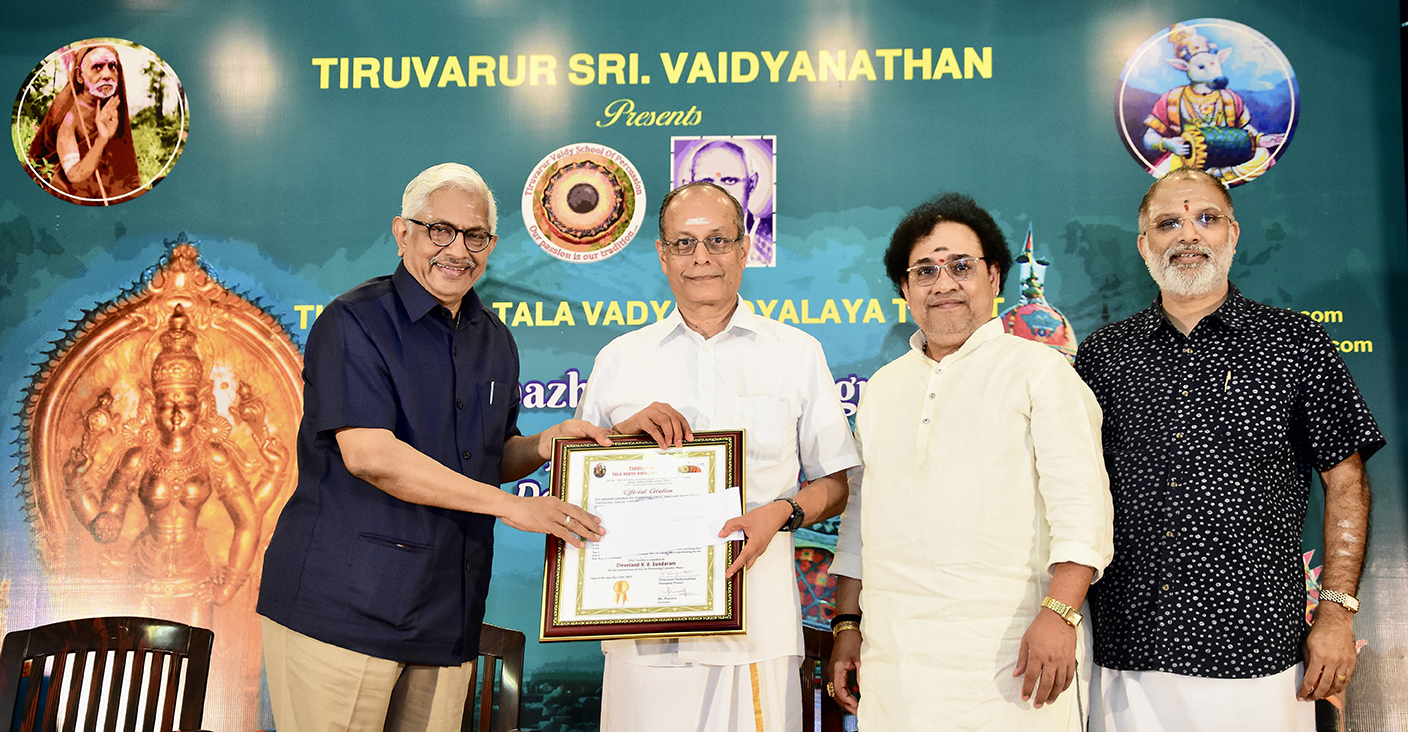 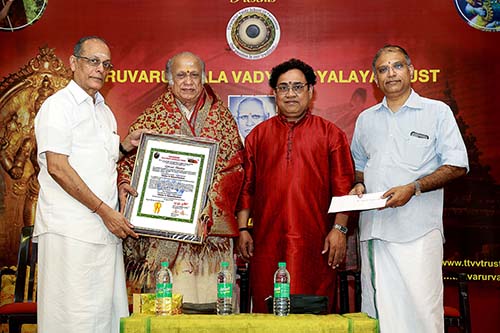 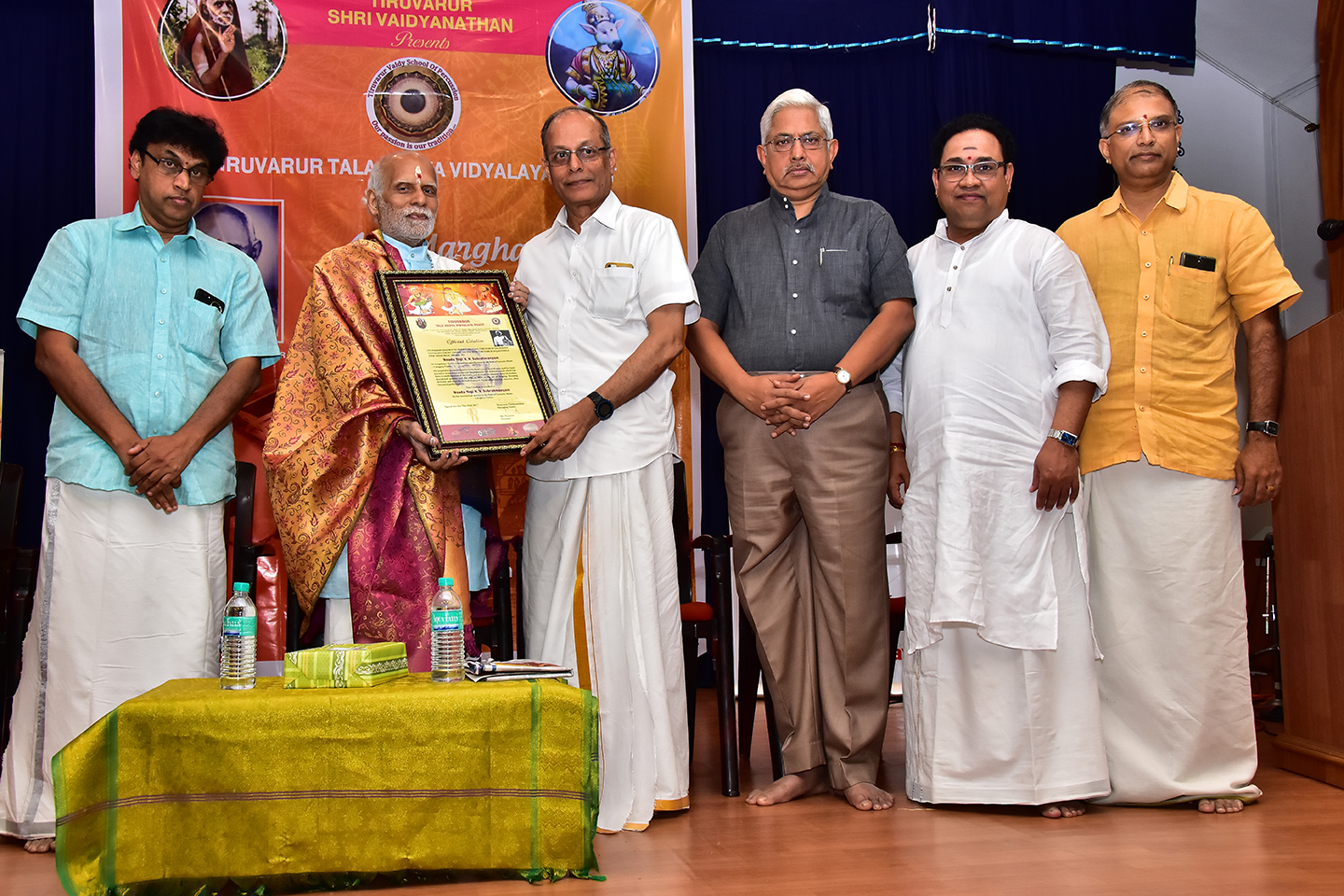 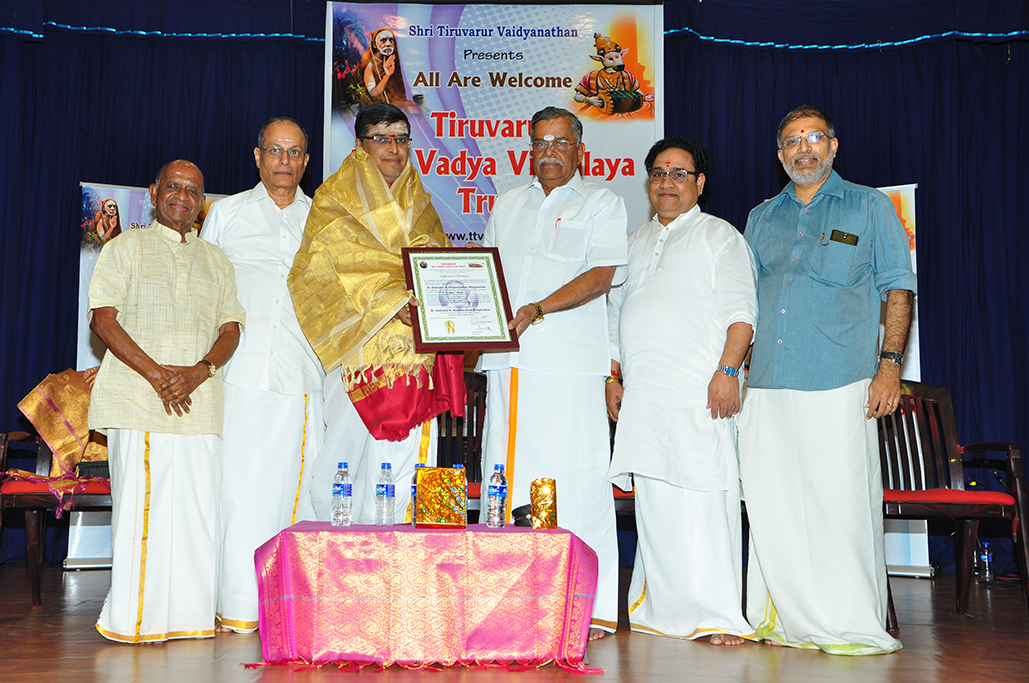 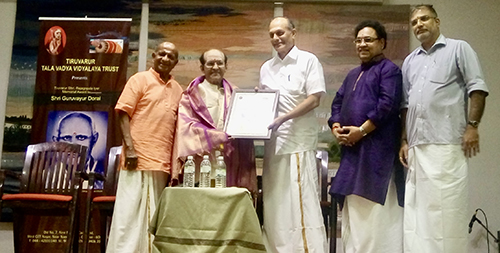 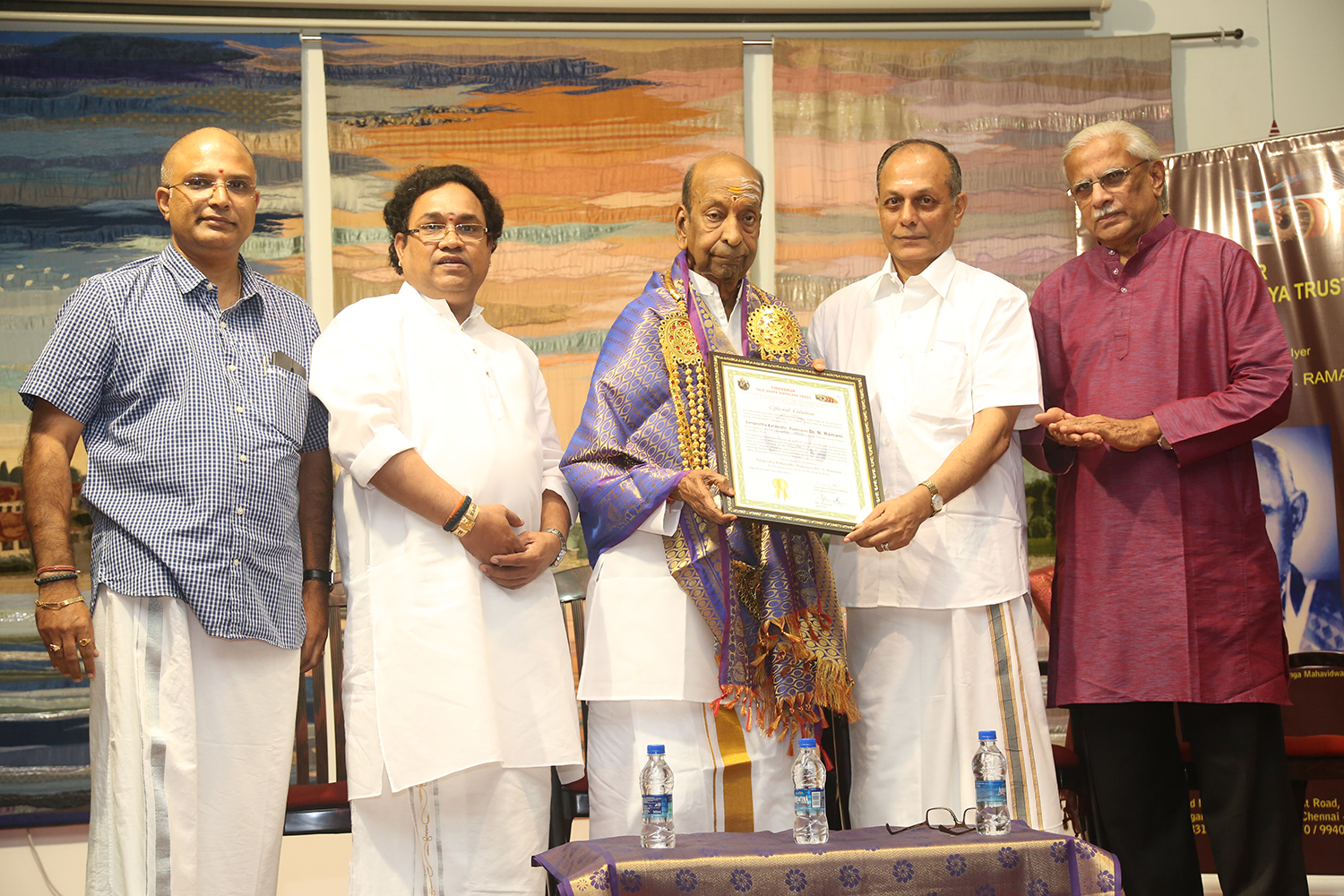 During the COVID Pandemic in 2020, the trust served people belonging to various sections of the society by providing them with necessary grocery items and financial aid. The trust also conducted about 40 concerts in virtual platforms, thus serving the art and artists during the unprecedent times. The trust has also helped various artists with financial aids when they were affected by heavy floods in Chennai in the year 2015. 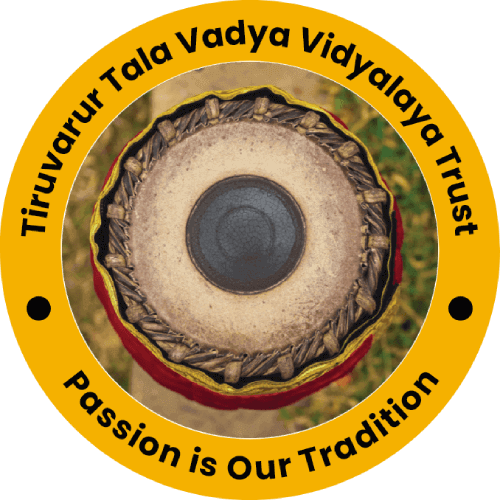 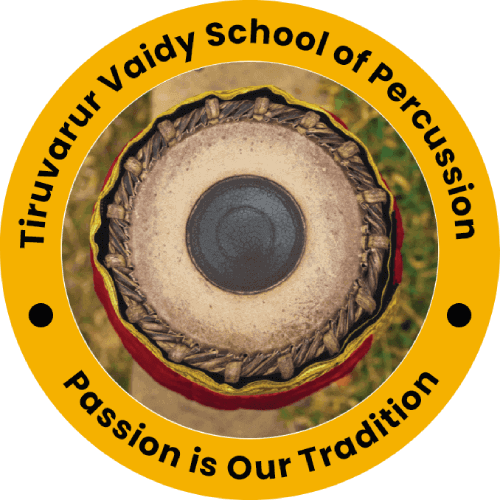